It wasn’t really a conversation, per se, but I found Dominique in a group of 6 or 7 riders as our car made its way up through the group on the final climb of the day.  I recognized him immediately, not only because at 6’2" and 180 pounds, he cuts a formidable shape on a bike, but also because he’d won the previous day’s 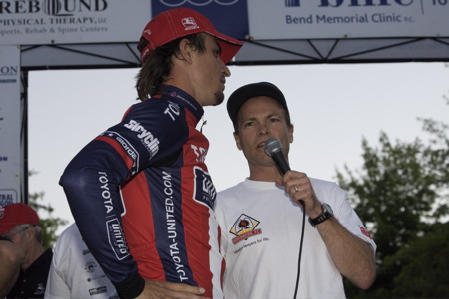 In fact, I’d been standing right behind him at the finish line of the criterium as he talked to the announcers. I noticed his shoes, which were seriously hot.

What can I say? I’m a sucker for a cyclist in well-chosen apre-victory kicks.

In fact, I so appreciated the PRO-ness of his choice of podium shoes, that I snapped a close up: 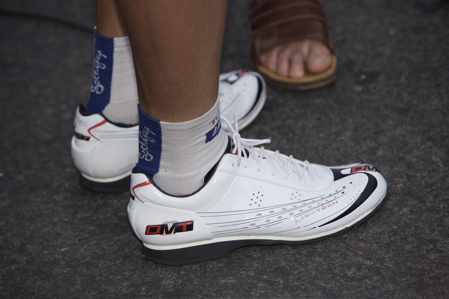 Back to the climb.

I am once again hanging out the window of the Astana team car (by the way, I owe Astana one for letting me tag along – thanks guys!) when I see Dominique. He’s flanked by a couple other of the Toyota boys. After owning the previous nights criterium (how very Toyota-United of them), they appear to be enjoying the day’s ass-kicking on the climb to Mt. Bachelor.

I frame the group with the lens and snap a few shots. Zoom in as my car is moving up the road and they are falling away from me.  Dom comes to the front of my viewfinder.

Snap, snap, snap. I peek over the top of my camera and look at the group. Eye contact and a smile as a sign of thanks for being good sports. It can’t be easy having a monster camera lens in your face when you’re suffering like that.

Mike the Driver hits the gas and I pop back in from the window.

Ten seconds later, Antonio the Mechanic comments from the back seat, "Heads up, we have company."

Dominique has accelerated away from the group to roll up next to the car: "Thank you for that. Your smile just made my day."

And, yes, Dominique – flattery will get you everywhere.  (Or at least onto the blog.) 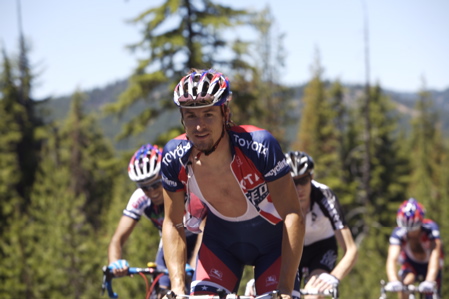 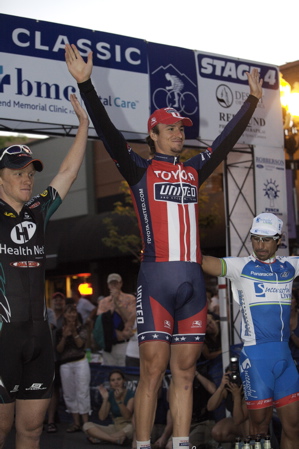